Luxury and Grace on The Strand

We discuss 4 separate homes for sale on the Manhattan Beach Strand. Here are links to those active listings: 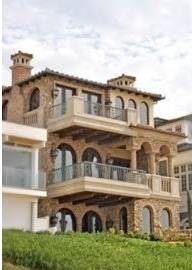 In the Market for Luxury and Grace?

It's summer, and that means everyone wants to be at the beach. If you lived on The Strand in Manhattan Beach, you'd already be there. Prestige homes on Manhattan Beach's Strand are the priciest in town, and some of the most expensive in the whole South Bay. Here's a look at a few that are currently for sale:

1600 The Strand (three bedrooms/five baths, 5,225 square feet) is a visionary 1980s modern home designed by architect Ray Kappe. Its curvy lines, concrete, steel and glass combine for a bold look reminiscent of a passenger ship. Totally unique properties tend to have a limited audience, though. The home's been marketed since February this year - more than five months - at $13,500,000, with no cuts and no buyers yet.

3516 The Strand (six bedrooms/five baths, 5,550 square feet) is a high-end, Italian-inspired home that was completed last year. They've even named it Villa Toscana Sul Pacifico and, to add an authentic feel, brought in old, reclaimed materials (bricks, beams and tiles) while having other pieces custom-made in Italy. One thing that's not so retro: a home theater with a huge screen. Despite its charms, 3516 The Strand has now lingered more than 8 months on the market. It began at $14 million and made a big cut this week to $9,850,000, more than $4 million below its start.

2920 The Strand (seven bedrooms/seven baths, 5,675 square feet) needs the most help among current Strand offerings. Though the design has some flair, and the home boasts a larger-than-normal corner lot, inside, the home needs updates. The layout is also chopped up, with the home built around a small pool in the center. On the (big) plus side, the rooms up front along The Strand are generous, particularly the gargantuan master bedroom, with panoramas of sand and sea stretching up to Malibu. The home was first listed in June 2009, recently came off the market briefly and returned at $11,750,000. The owner paid $9 million in July 2006.

1804 The Strand is the newest offering of the bunch. Just 30 days on market, but with a start at $11,900,000, it could linger a while, too. Built custom for a family that's now moving away, the new (2010) home is both sharp and comfortable. Ocean and Manhattan Beach pier views are a big draw from the built-in table just off the kitchen and the two mini-master suites on the top floor. Still, the main house is quite modest in size, limited because there's a small two-bedroom unit in the back, intended as guest quarters. This gives the main home less of the feel of a permanent residence and more like a second home, perhaps limiting the buyer pool. 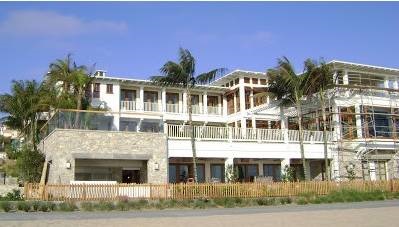 While we're talking about Manhattan Beach's Strand, it's worth noting some development at the south end of town.

Where once there were six separate lots between 2nd and 3rd streets, there are now only three; lots were combined to enable some large new homes to take shape here.

The Strand’s only triple-lot home, right at 3rd, is a charming modern California beach bungalow completed last year. Despite the fears of residents that the home would be huge and imposing, like a big hotel, its actually scaled nicely, with much of the living space tucked back away off The Strand in an L-shape.

Down at the corner with 2nd St., the scaffolding just came off another brand-new custom home that mixes a classic Mediterranean look with some modern touches. Between those two beach mansions is a gap, for now soon to become a double-lot home.

After several straight years of construction in the area, you'll see Manhattan Beach's south end quietly become a special new island of luxury and grace, raising the bar for the rest of The Strand.