Half-Way Through 2010: Sales Statistics in the Major South Bay Regions

This week we're looking at sales statistics for the first half of 2010 in three major South Bay regions: the Beach Cities (Manhattan, Hermosa, Redondo), Torrance (all areas) and the PV Peninsula. All three regions have seen sales exceed the totals seen in the trough years of 2008-09, but which area's performing best so far?

Earlier this week I provided more granular detail on sales within sub-regions of Manhattan Beach in two posts on MB Confidential – these were more year-to-date, covering January through the end of July. Here are those two posts: 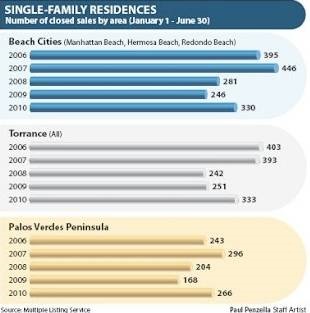 And speaking of Manhattan Beach, the latest news is that the MB Open volleyball tournament will go on next weekend, with no grandstands and "no bells or whistles," despite the AVP's apparent collapse. For more see this MBC post.

When the housing bubble popped, the impact hit all real estate markets. Declining prices, much tighter lending and a worsening economy put a damper on sales activity. Locally, the worst years were 2008 and 2009, with the fewest sales recorded in a decade or longer in many markets. Now, local real estate is showing signs of life here in 2010. The graphs on this page contain five years’ worth of data for three major regions of the South Bay. For each region, we’re looking at the number of closed sales of single-family homes in the first half of 2010, from January 1 to June 30.

We’re comparing this year’s data with the same period for each of the four prior years. Keep in mind that the date of closing is often 30 to 60 days after a deal is struck, which makes this a slightly lagging indicator of market activity. Price trends are a separate issue that we’ll look at down the road. We know that many local markets have suffered drops of 20 to 30 percent or more in home prices during the recent slump. Lower prices are a partial explanation for renewed buyer interest. One precondition for a price rebound is for demand to return, as it began to do earlier this year.

The three coastal cities of Redondo, Hermosa and Manhattan Beach together had their best year recently in 2007, with 446 sales. (My own community of Manhattan Beach had a slightly better 2006 than 2007.) The dropoff in the sales pace from there to the low in 2009 was 45 percent, fully 200 fewer sales. Last year’s sluggish sales set up a 34 percent jump in sales this year down by the water, back up to 330 sales of single-family homes. That’s encouraging, but sales are still down by a quarter from that 2007 high, and down 16 percent from 2006.

The many areas of Torrance make this one city the biggest, and most diverse, of local markets. In 2006, sales exceeded 400 single-family homes. Sales later dropped almost as much as we saw in the beach cities, a 40 percent decline from the first half of 2006 to the first six months of 2008. As with other South Bay markets, 2008 and 2009 were the most sluggish, but last year, Torrance actually recorded a slight increase from 2008 levels. In the first half of 2010, 333 sales put the city up by a third over 2009, just like the coastal towns. But the recovery was a bit more complete, with sales just 17 percent shy of the recent peak in 2006.

The Hill had a standout first half in 2007, a time when nationally, many real estate markets were already crashing. With 296 single-family transactions, sales were up 22 percent over 2006. The slowdown was as severe for the PV markets as Torrance and the beach cities, with a 43 percent dropoff in sales activity from the first half of 2007 to the same period in 2009, when just 168 homes changed hands. From the look of things, PV is back in a big way. A 58 percent rise in sales in this year’s first half is the most impressive of the three regions we’re looking at. The peninsula is the only market to have 2010 sales exceed 2006 sales from January to June, and the pace after six months was only off 10 percent from the recent peak in 2007.